At Fulton, we consider coffee and beer to be our life coaches. Coffee gets us started every morning with a rousing "Go get 'em! We can do this." A few hours later, after the day has gone off the rails, beer is there to reassure us. "You'll get them tomorrow. You gave it a good shot! Keep your chin up."

Individually, coffee and beer are both worthy and capable of filling these roles in our lives. But it's not until they're combined that the magic really happens. Such was our discovery 7 years ago when we infused the first casks of Worthy Adversary with Peace Coffee. The transformation into an entirely new and delicious beer was so dramatic that War & Peace was born. Since then, War & Peace has evolved into its own recipe and brand and has become one of Fulton's most popular and sought after beers. And this year, it's even better than ever. The Guatemalan Dark Roast aromas practically leap out from the glass, and are confirmed by every sip. This beer is unapologetically coffee-forward with a serious stout backbone.

Unlike Worthy Adversary, we don't advise cellaring War & Peace for an extended period of time. The aromatic oils extracted from the coffee beans during the conditioning process are very delicate, and tend to dissipate over time. That's not to say it won't still be a great beer a year or more down the road, but as time goes on, it will lose coffee character and begin to resemble a more traditional imperial stout. Not a bad thing by any means (and it is fun to contrast an aged version with a fresh version), but in our opinion it's not the best way to enjoy your War & Peace.

2017 War & Peace launches tonight (January 19th) in our taproom, and begins to hit the rest of our distribution territory next week. Look for it on draft and in 4-packs of 12 oz bottles. As with most of our seasonal releases, we produce War & Peace in relatively small quantities, so it won't be on shelves for a long time. Once you've had one, let us know what you think of this year's version on Facebook, Twitter, or Instagram. 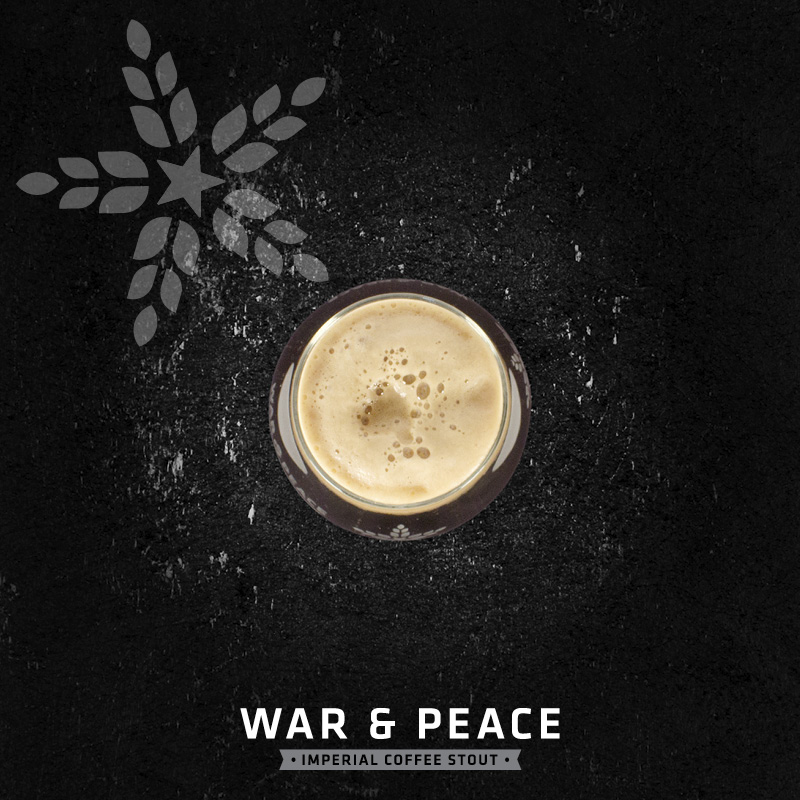 Fulton is a Minneapolis brewery founded in 2009. We own and operate a 20 bbl brewery and taproom in downtown Minneapolis next to Target Field, and a 50,000 square foot production brewery in Northeast Minneapolis. In 2016, Fulton will produce approximately 28,000 barrels, sold mostly in the Twin Cities metro area. We’re a group of beer enthusiasts focused on brewing extraordinary beer and working to make our community a better place. Our Ful10 Fund provides loans and support to other small businesses and non-profits, and our Fulton Racing teams encourage participation in active lifestyle sports. Best of all, we get to live, work, and play in Minneapolis-St. Paul, consistently ranked as one of the top metro areas in the United States for quality of life, urban parks, education, bicycling, theater, dining, and more.

Sounds like a place you’d like to be? We are seeking a Graphic Designer to join our rapidly growing company. The right individual is a leader who works well with others, focuses on quality and technical excellence, loves to work and play hard, embraces opportunities for continuous learning and improvement, and is passionate about extraordinary beer.

The Fulton Graphic Designer is a key position within the company and is a cornerstone of Fulton’s creative communication output. In an increasingly crowded market with limited shelf space and consumer’s attention span waning, being an effective communicator is paramount to our success. It is our job to cut through the noise and rise to the top.

Fulton’s Graphic Designer must be proficient in industry leading software and technologies. This person uses critical thinking to solve problems in visual form. An eye for consistency and attention to detail go hand and hand-and are required. An ability to visualize ideas before they’re finished and to effectively communicate what can/will be is crucial. This person must have an innate ability to understand how people perceive and understand visual information. The perfect candidate is a 50/50 mix of dreamer and pragmatic doer.

The workload of this position on any given day will be need the careful management and balance in priority of immediate and long term projects including but not limited to:

Candidate considers the organization of information and consumer perception of brand in clear and hierarchical ways that lead to brand endearment and sales conversions. Working with goals in mind this person should use divergent thinking to begin the design process as needed to give Fulton a competitive edge.

Fulton’s graphic designer will report directly to the Fulton Marketing Director and will reside within the Marketing Department.  Working closely with the Marketing and Sales teams this person will be a strong advocate for creative solutions to classic business problems and needs.

Fulton offers salary commensurate with experience and a benefits package. We’re looking to hire people who are serious about beer without taking themselves too seriously. The ability to adapt to change, operate independently, work hard, and learn fast is a must.

Still interested? Send your resume, a URL to your portfolio, and any other reasons why you’re a good fit at Fulton to Jim Diley at hr@fultonbeer.com.