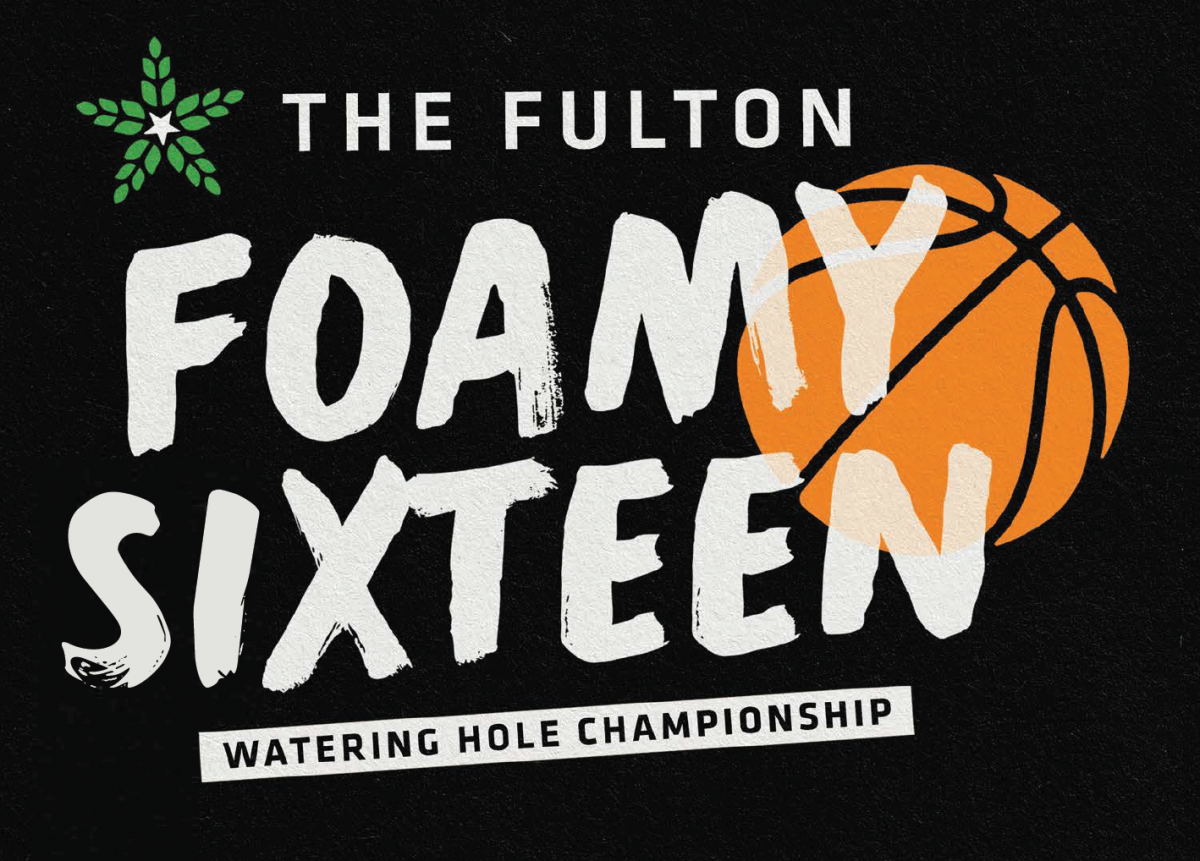 It's game time! Help your favorite watering hole make it to the championship. Which championship? Well, glad you asked.  We're talking about the 1st Annual Fulton Foamy Sixteen of course. The bar/restaurant that serves the most Fulton during each time period advances through the bracket. During the college basketball semi final games on April 6th, Fulton will be hanging out at both of the semifinalist's accounts with swag, high fives, and raffle tickets. The semifinalist account that serves the most servings of Fulton from April 4th until the cutoff on April 6th will be the winner, and a pair of tickets to the championship game on April 8th will be raffled off to a customer at that account. This is week one and the match ups are below. Follow @fultonbeer on Twitter, Facebook and Instagram for updates on the brackets. 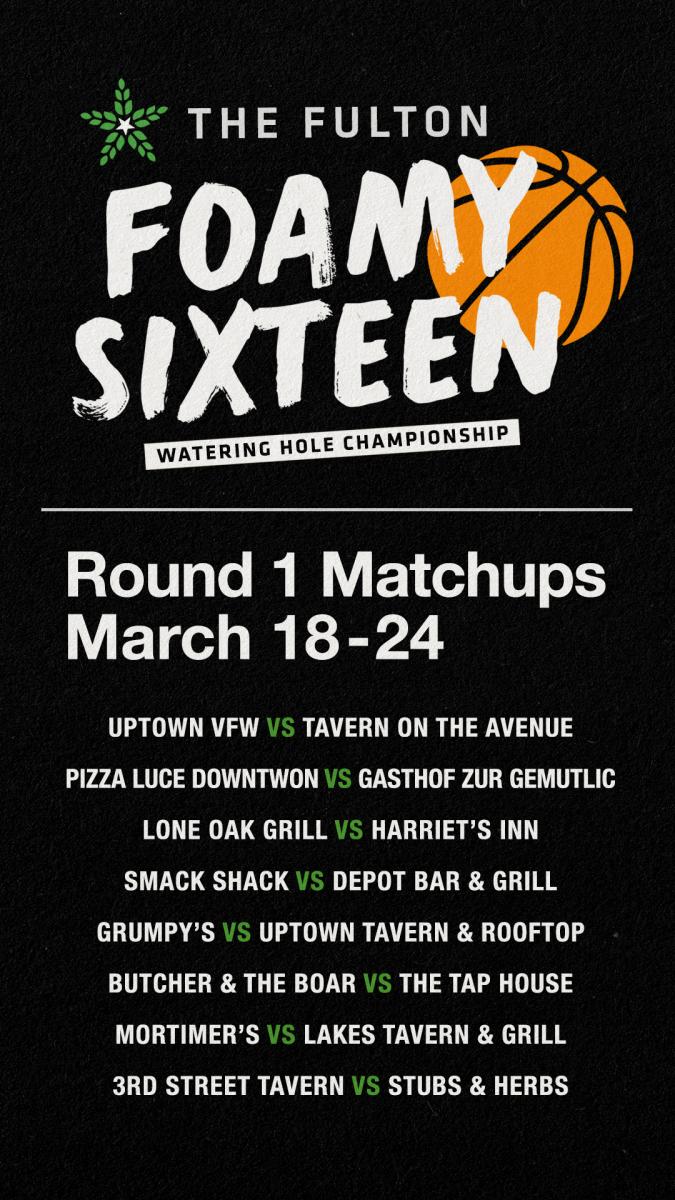 No purchase necessary to win.

The first ever pint of Fulton was poured at The Happy Gnome on October 28th, 2009. To commemorate our 10th anniversary, over the course of 2019 we'll be publishing a series of 10 stories from the last 10 years in our blog and newsletter. Welcome to Part 1.

IN THE BEGINNING THERE WAS HOMEBREW 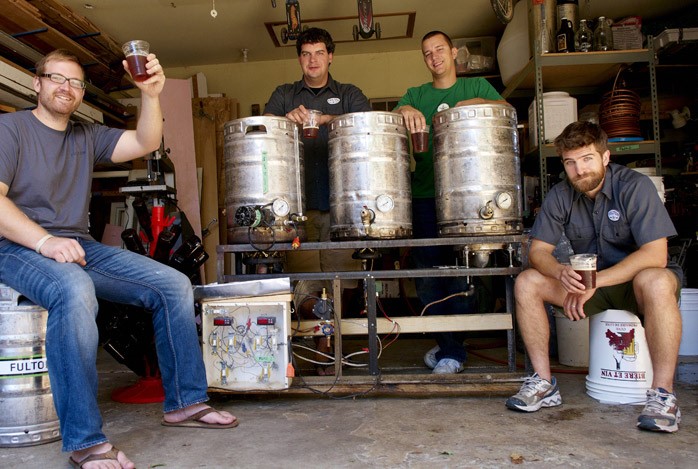 Starting a brewery was not the original plan. That came later.

First it was a Mr Beer homebrew kit; a gift. Then an experimental brew over a long cabin weekend with inconclusive results. An invitation over birthday beers at Gluek’s Bar. The first “real” brew day on a -13 degree day in February 2007. The first sips a few weeks later gave the first hint: we can make beer. Good beer!

The next two years whipped by. The Saturday morning trips to Northern Brewer and Midwest Supplies, and the slightly later Saturday morning trip to pick up the hose clamps you forgot. Moving from a kitchen stovetop and carboys in the basement to a single turkey burner and a modified half barrel keg in a one car garage to a 3-vessel 10 gallon all-grain system with pumps and programmable temperature control in a two car garage.

Somewhere everywhere along the way we were drinking beers — possibly homebrews or possibly another craft beer in bottles that hopefully didn’t have the dreadful (to a homebrewer) pressure sensitive labels that are impossible to remove when it’s time to clean your bottles for reuse. And over those beers someone first spoke the words “wouldn’t it be cool if we started our own brewery someday? An actual brewery, not just a home brewery?” This was a novel conversation that made the four of us unique from exactly zero other homebrewers who had ever brewed a good beer. The differences in our case ended up being timing, a little bit of luck, and a deep well of persistence tinged with a healthy hint of ignorance.

At that time, we thought one of the hardest parts was gauging how good our beer actually was. And, even if it was objectively good, would that mean it would actually sell? Sure, there are open competitions that judge beers on their fundamental merit — but winning gold medals for homebrew recipes is far from a guaranteed recipe for commercial success in the marketplace against the Goliath international breweries and the well-established regional craft breweries.

On the other hand, our families and friends continually told us how good our beer was. The problem, though, is that friends and family feedback is not exactly a high bar of professional critique. You have your family, who are Minnesota Nice and just want to participate in the appearance of success — so they’ll tell you it’s great beer, regardless of how it actually tastes. Then there are your friends, who have been consuming reasonable volumes of your beer and are both a) inebriated enough to be disqualified from any professional gravitas they might have otherwise carried (and likely had none to being with) and b) not going to criticize the hand that’s feeding them free beer.

So there was an objectively problem. But we carried on nonetheless.

One recipe, “Wagging Tail Pale Ale,” — an early version of what would only much later become our third year-round beer “The Ringer” — was a particular favorite. We poured through a lot of 5 gallon cornie kegs of that in 2007-08, and as we got closer to launching the business we were convinced that it would be our solo launch beer. The beer got better and better over time, and even though we didn’t launch with it initially, thankfully the name got better too.

It wasn’t until very close to our target launch date — less than 3 months — that we were convinced to come out with an IPA instead of a pale ale. As we sampled Wagging Tail to more and more of the local industry figures, we kept getting similar variations of this response: “This is nice. Have you ever thought of making an IPA? This is kind of a hops market.”

We had actually thought of an IPA, if only for a minute or two. Sweet Child of Vine was a name that came before a recipe, thanks to a fortuitously timed radio play of a certain G’n’R song on a brew day. The beer we later brewed to fit the name fell into place the second time we ever brewed it. It was almost perfect.

So we thought we had the beer figured out. But that wasn’t the hard part (not that there was an easy part). In 2009, locally brewed beer felt like it was on the cusp in Minnesota, but it was not yet a big thing. A whopping 12 breweries were in operation in the state — or, one for every 440,000 people. To make things more difficult, Minnesota regulations made an already challenging business even moreso, compared to more beer-progressive states. Taprooms wouldn’t become legal in Minnesota until 2011. There were zero production packaging / distributing breweries in Minneapolis at that time and even if there had been it was illegal for them to sell growlers.

But — though we didn’t know the extent of it at the time — we were riding the crest of a major wave. Our state was ready for modern beer laws, and we were in prime position to push them along.

If the sky is the limit then we've proudly hit that limit. 10 years ago while brewing in our garage we would have never imagined being able to enjoy a MN craft beer in-flight (let alone one of our own beers). But, as of this past Friday March 1st Fulton's Lonely Blonde is now available on Sun Country flights. 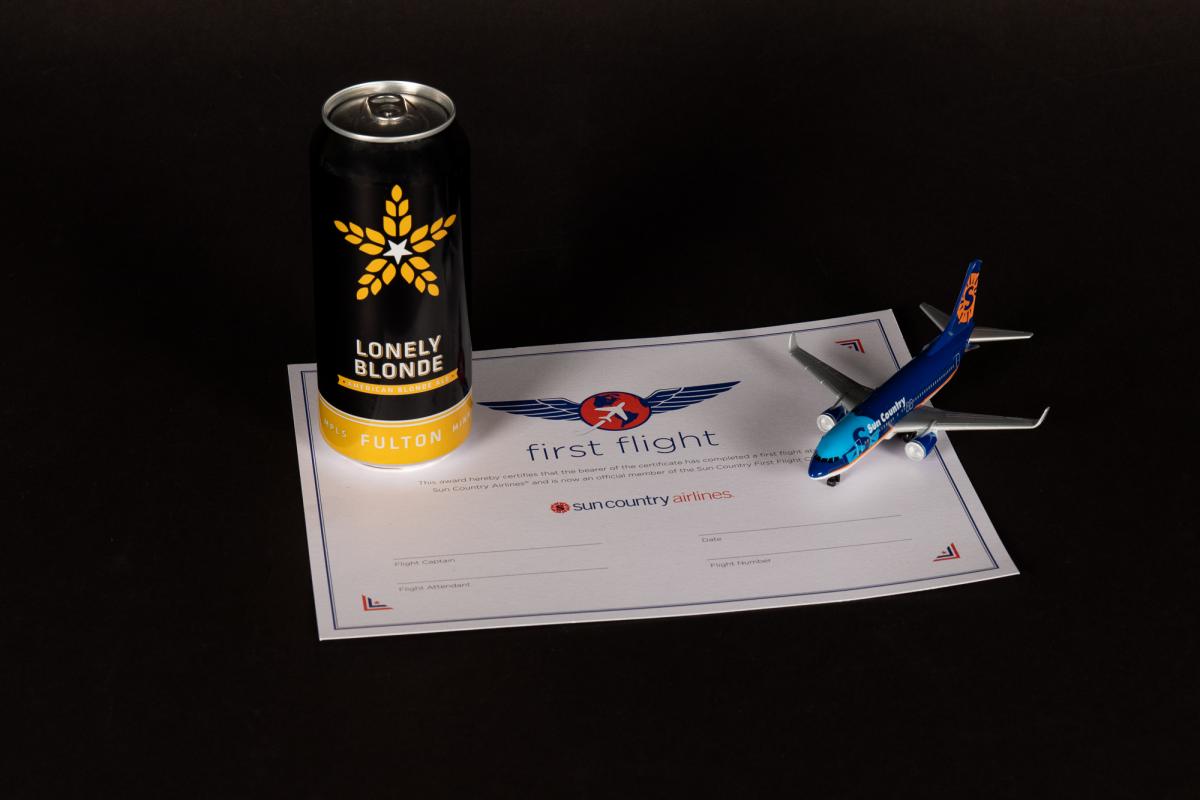 So many destinations, so little time. One thing is for sure, we're headed somewhere warm soon for Spring Break. Vegas anyone? 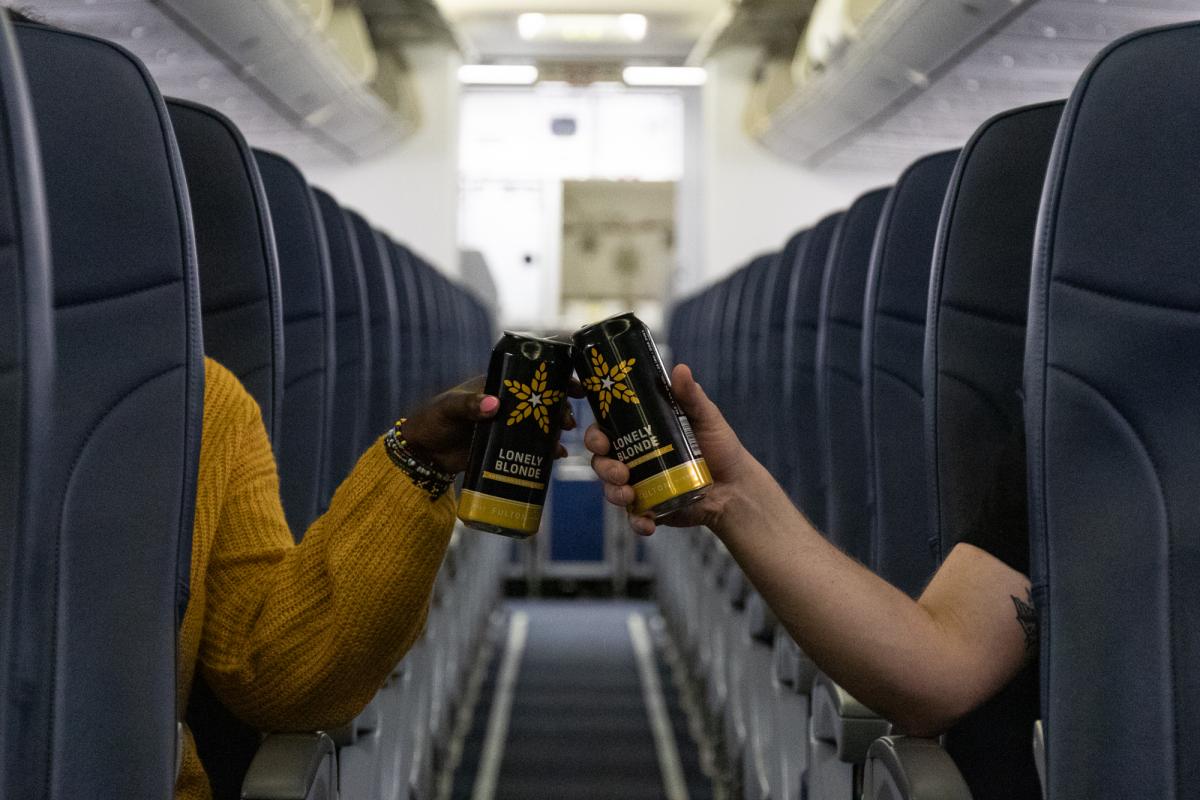 Minnesota's favorite American Blonde Ale 5 miles up in the air? Yep, we'll drink to that. 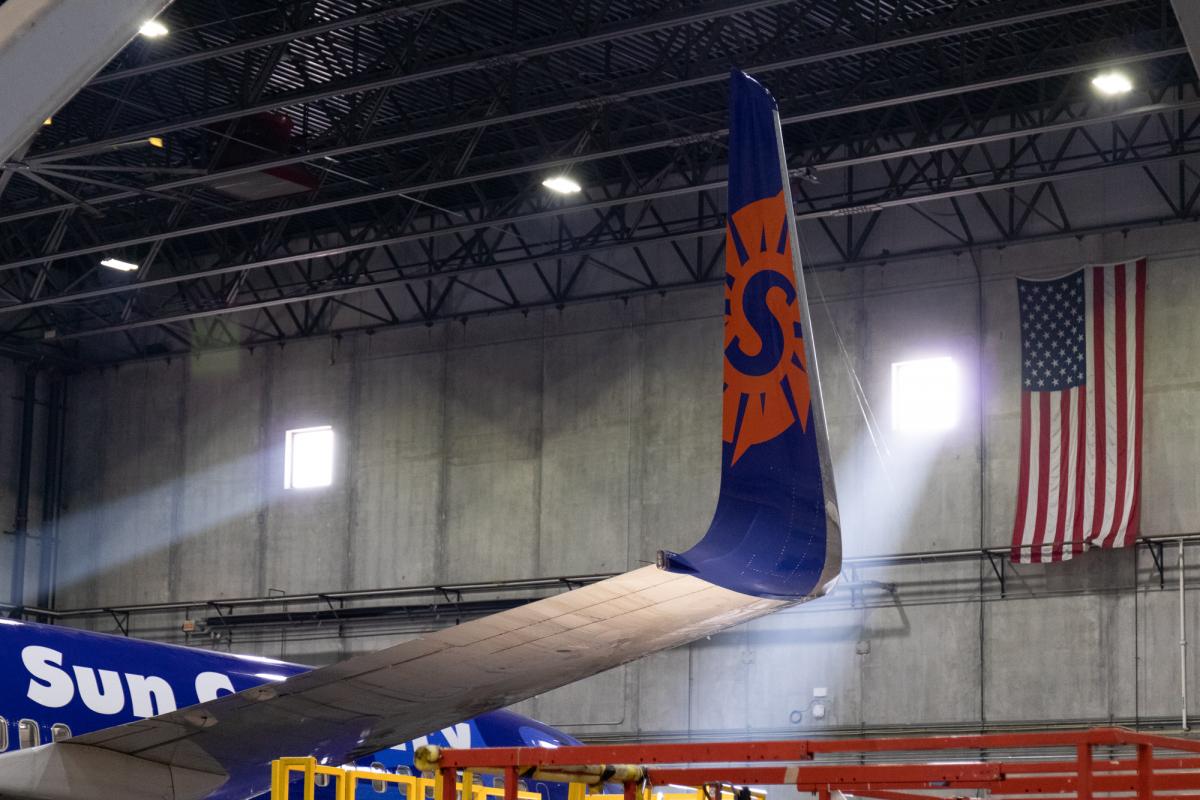