This week, we’re releasing not one but TWO all-new beers in cans. The first is “Hopstar”, our Northeast-style (read: hazy and twice-dry hopped) Session IPA. If you attended the Gran Fondo or have been in our taproom or a select number of bars in the last two weeks, you may have already enjoyed a Hopstar or two on draft. Beginning this week, Hopstar cans hit distribution in the metro area, with the rest of the state following shortly thereafter. Hopstar has already become a crowd favorite, so pick up a 4-pack when you see it – it won’t be around for long. In fact, pick up a couple of them: Hopstar resonates with juicy tropical hop notes from Citra, Amarillo, and Mosaic, but at just 4.9% ABV and a pleasingly balanced 37 IBUs, you’ll find the cans emptying themselves at an astonishing rate. 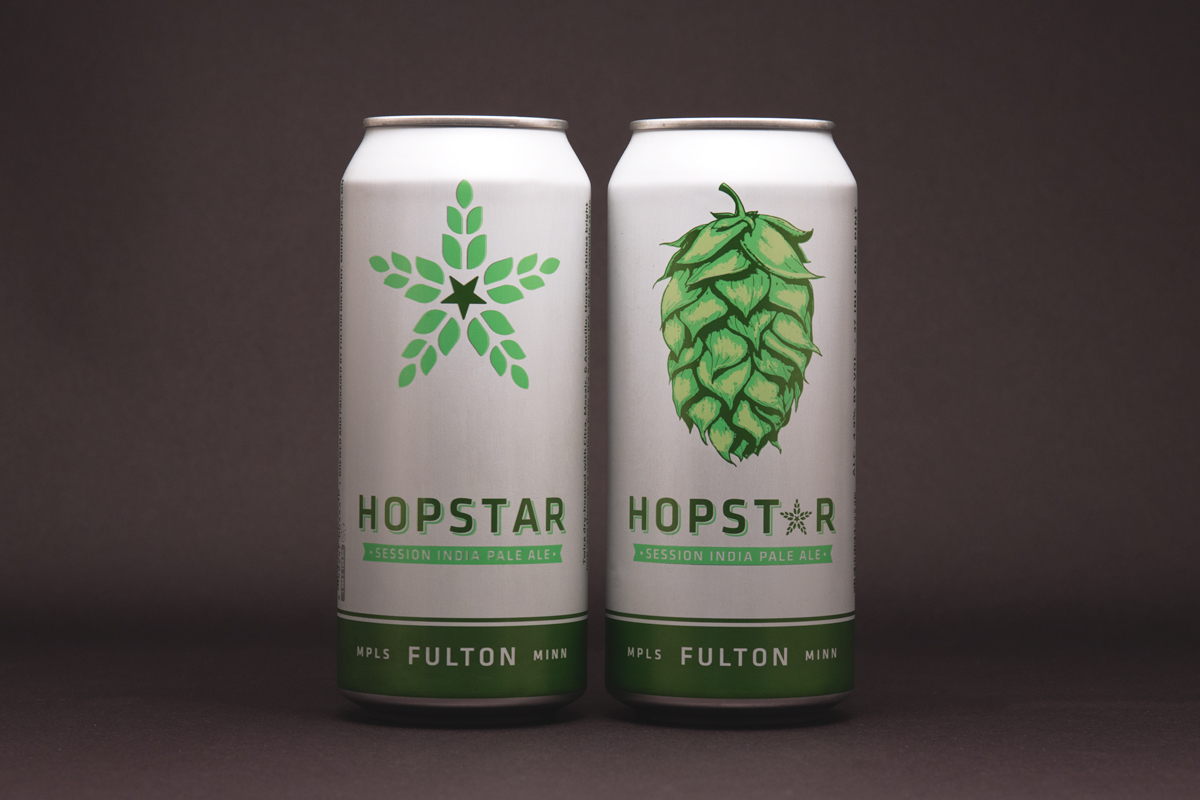 Speaking of limited edition canned beers you may have already been hearing about, we’re also releasing “Extra! Extra!” this week. This one is a collaboration with our neighbors—you may have heard of them—at the Star Tribune. This Thursday, May 26th, is the Star Tribune’s 150th anniversary, and as part of their summer-long sesquicentennial celebration, we came up with a beer that’s both timeless and all-new. It’s an interpretation of the classic American Pale Ale style, but brewed with the addition of an experimental hop variety, dubbed simply “09326”. Extra! Extra! launches at our taproom on Thursday, and will be available—again, in very limited quantities—in 4-pack 16 oz cans in liquor stores this week as well. 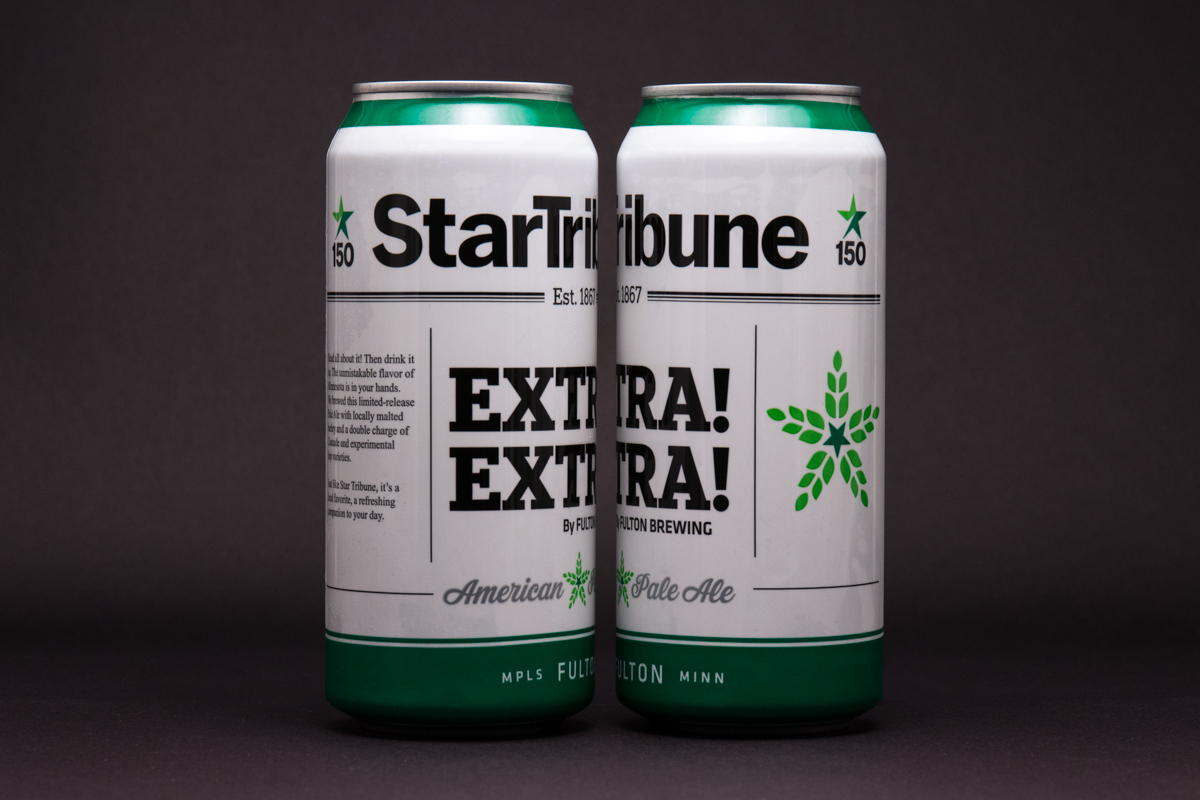 In other can-related news, just last week we received and commissioned our brand-new canning line. Built just hours from here by American Brewing Equipment in Lincoln, Nebraska, our new line cruises along at 60 cans per minute, and will enable us to put more of your favorite Fultons in cans more often. Last week got a little crazy, as we had to unpack, install, and commission the line in just four days before we started filling Hopstar and Extra Extra! cans. Our crew had some long days and short nights, but by Friday afternoon we were pumping out cans by the pallet. If you see any of our packaging and brew crew out and about, give ‘em a high five – they deserve it.

Limited-Edition Beer Debuts on May 22 at Fulton Taproom at VIP Tasting event, Public Taproom launch May 25, Available at Retail on May 26 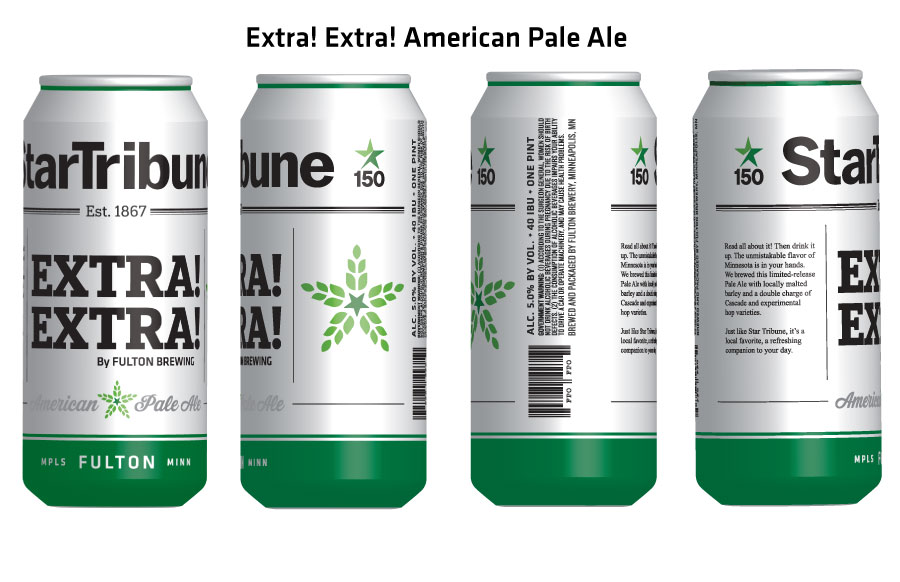 MINNEAPOLIS – May 11, 2017 – Fulton Brewing Co., one of the upper-Midwest’s leading craft brewers, today unveiled “EXTRA! EXTRA! American Pale Ale,” a limited-edition brew to commemorate the 150th anniversary of the Star Tribune. The beverage will be the star attraction at an invitation-only VIP “First Tasting,” on May 22 at the Fulton Taproom 414 N. 6th Ave., Minneapolis.

On May 25, the 150th anniversary of the Star Tribune’s first date of publication in 1867, EXTRA! EXTRA! American Pale Ale will be available to the public at the Fulton Taproom. The following day it will be on sale throughout the state of Minnesota while supplies last. In addition, Fulton will feature the ale at the Stone Arch Bridge Festival in mid-June.

Made with locally malted barley and a double charge of Cascade and experimental hop varieties, EXTRA! EXTRA! American Pale Ale was brewed to appeal to beer enthusiasts who appreciate a lighter, refreshing brew.

“For a century and a half, the Star Tribune has been recognized for its award-winning journalism,” said Steve Yaeger, vice president and chief marketing officer of Star Tribune Media Co., “But while some awards gather dust in a display case, thanks to our friends at Fulton, we now have an honor we can enjoy with our readers, advertisers, employees, and supporters as the summer kicks off. We raise our glasses to the Star Tribune family and the talented people at Fulton Brewing for bringing an ‘Extra! Extra!’ level of fun to our anniversary.”

“After 150 years, it’s only appropriate that we take a moment to salute one of our state’s great institutions,” said Ryan Petz, president of Fulton Brewing. “We invite Star Tribune fans and our loyal customers to join us in an EXTRA! EXTRA! American Pale Ale toast to celebrate the countless contributions the Star Tribune has made to the life of our city and state. Cheers to a job well done—and our sincere wishes for 150 more years of continued success.”

Extra! Extra! Pale Ale is an American pale ale made with American pilsner malt and high-quality German specialty malts. This beer features Cascade hops as well as a new experimental variety (09326) that is a daughter of Cascade. These ingredients come together to create a pleasantly crisp and aromatic pale ale with notes of citrus and tropical fruit.

Celebrating its 150th anniversary in 2017, Star Tribune Media Co. LLC is a locally owned, award-winning media company serving Minnesota and the upper Midwest. With the fifth-largest Sunday and sixth-largest daily circulation newspaper in the U.S., the most-visited local website, a quarterly magazine, a popular arts/entertainment publication, and a range of home-delivered advertising solutions, Star Tribune reaches more consumers than any other Minnesota media brand. For more information, visit www.startribunecompany.com.

Fulton Beer was founded by four homebrewers in a Southwest Minneapolis garage in 2009 with the mantra “Ordinary Guys Brewing Extraordinary Beer.” Since then, Fulton has become one of the fastest growing breweries in the Midwest. In 2012, Fulton opened the first taproom in Minneapolis, which offers an ever-changing tap selection as well as house-brewed non-alcoholic soda. Fulton commissioned its second brewery in 2014, a 51,000 square foot facility in Northeast Minneapolis. Fulton is best known for Sweet Child of Vine, a balanced and approachable India Pale Ale, and Lonely Blonde, an easy-drinking Blonde Ale. These and Fulton’s seasonal and limited release beers are currently available on draft, in bottles, and in cans throughout Minnesota, Wisconsin, Iowa, and the Dakotas.  Information regarding beer availability, taproom hours, tours, special events and more can be found at www.fultonbeer.com.

OUR NEWEST BEER REVEALED -- AND WHERE TO GET IT FIRST.
Posted Monday May 1, 2017

Hopstar is all juicy hop flavor and no lingering bitterness. Twice dry-hopped with Citra, Mosaic, and Amarillo and left intentionally hazy, Hopstar punches in at just 4.9% ABV, making it your perfect warm weather IPA companion. Hopstar will be available on draft and in cans throughout Fulton's distribution footprint in May and June. Join us at the Whole Hog Feast this Friday night -- and of course at the Fulton Gran Fondo block party on Saturday -- to be among the first to try it.

FULTON GRAN FONDO IS JUST A WEEK AWAY 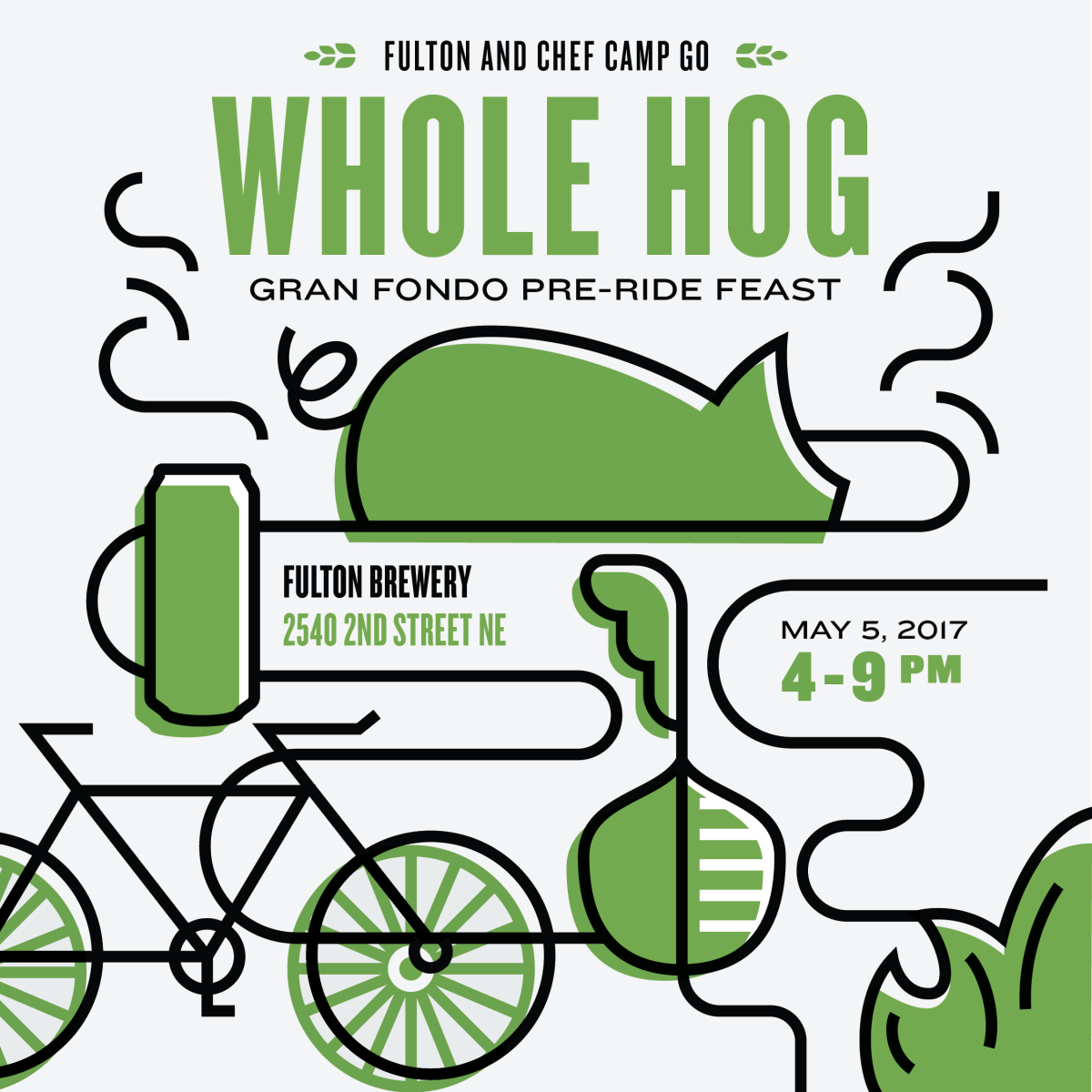 Join us for a feast on Friday night (5/5) at our NE brewery, featuring Chef Camp Chefs Erik Sather of Lowry Hill Meats and Yia Vang of Union Kitchen. Sather will be cooking up a whole hog (from Tangletown Gardens) porchetta-style and Vang will be slow roasting veggies over the fire. Join us for an epic meal, North Mallow s'mores bar, fun camp activities and of course, a couple of beers -- including Hopstar.

Tickets are just $20, and can be purchased ahead of time here. No need to be a Fondo rider to participate.

RIDE OR PARTY (OR BOTH?)

Join us at the 4th annual Fulton Gran Fondo for bikes, bands, and beers. The ride departs in the morning from the Fulton Production Brewery in NE Minneapolis. This year, we're again offering the 100 mile "Gran" as well as a 40 mile "Medio" Fondo. Start times are 9:00 AM for the Gran Fondo, and 11:00 AM for the Medio Fondo.

Enjoy riding, but never ridden in an organized ride before? The Medio might be the perfect fit for you. 40 miles isn't too far, and there's a rest stop at the halfway point teeming with goodies from 10 --count 'em -- local food and beverage companies. More on that here. 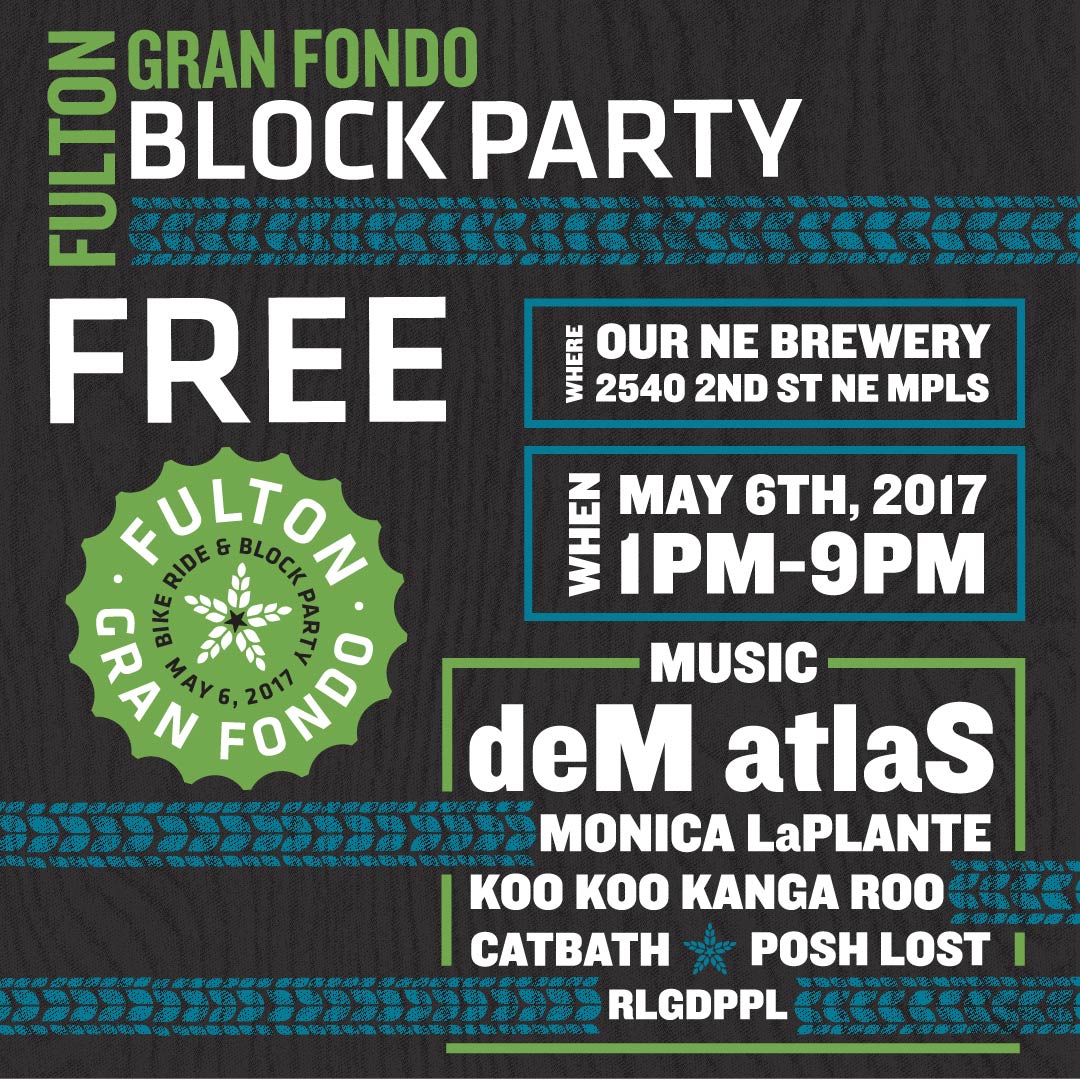 Whether or not you're riding the  Fondo, there's enough beer and fun for everyone at the block party. The party starts at 1 and is free to attend. We've got more music, more food, our growing Fulton Partner Market and nearly an endless amount of beer. Grab your friend, roomie, sibling...whomever, and get on over to our NE production brewery at 1pm.

A very special thank you to North Memorial Health for sponsoring the 2017 Fulton Gran Fondo.

Yep, it's perfect bike riding and block party weather this weekend. See you soon! Oh, and be on the lookout for Sasquatch.