Welcome to part 2 in our ‘10 Stories for 10 Years’ blog series: (Click here if you missed Part one)

“Hi. We are a new Minneapolis brewery.*”

By September 2009, we were on the cusp. The “what if?” questions became “why won’t this work?” which became “well then how?” After first dances with all of the beer distributors in town, we convinced Hohensteins to take us on. Whether it was seeing Karl the owner hop on a forklift to help out when they were down a person, Jim the General Manager on a first-name basis with all the beer buyers we visited, or the near-instant camaraderie we built with their sales team, everything just clicked. Hohensteins wasn’t the biggest distributor around by a long shot, but they were years ahead of anyone else around in the craft distribution scene, and still had the reach and operational prowess to scale up if things went well. And crucially, they were patient and willing to take the time to teach to four young guys with day jobs who didn’t know anything about the beer industry.

Four days after we signed our contract with Hohensteins, they hosted a Mississippi River boat cruise with their top bar, restaurant, and liquor store customers. Each brewery in their portfolio got to bring two beers to sample at a table on the boat. This was a golden opportunity to get our name -- and our beer -- in front of hundreds of potential customers all at once. The Harriet Island parking lot was filled with vans and company cars clad in graphics of legendary craft breweries like Left Hand, Boulder, and Bell’s. As we unloaded the igloo cooler full of samples out of the backseat of Ryan’s 2002 Ford Focus**, it occurred to us that the homebrew we would be pouring that afternoon was packaged in reused bottles originally filled by the very breweries sampling alongside us on the boat. We had no stickers, no keychains, no brochures. Our homebrew bottles didn’t even have labels. The only Fulton branding on the entire boat was an 8.5 x 11 print of our logo above our table and the two t-shirts Ryan and Pete were wearing that Chux Print had dropped off at Pete’s garage earlier that day.

Once the bottles were popped, we relaxed and started to have some fun. Within the first hour, word had spread around the boat, and we were hearing the same questions over and over again. “A new Minnesota brewery? Can I try the imperial stout?! When do you launch? How can I get your beer?” Despite our humble, naive, and last minute appearance, we had nailed it. Everyone wanted to know about the new Minneapolis brewery, and it didn’t hurt that they loved the beer, too. Now we just had to brew a batch larger than 10 gallons. 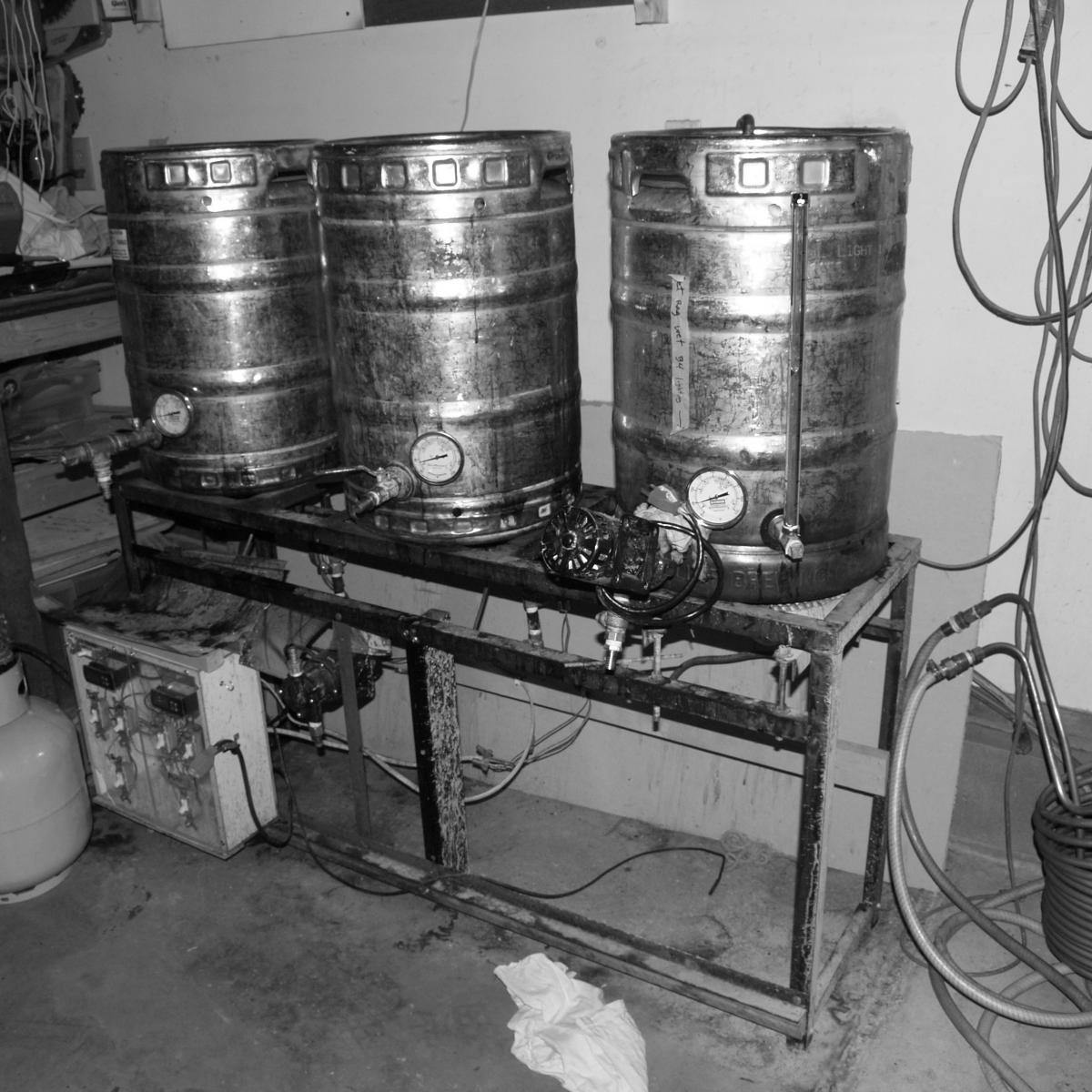 A week later, we were driving to Black River Falls to brew our first commercial batch of Sweet Child of Vine. Jim and Todd at Sand Creek Brewing had agreed to take us on. Better yet, they were willing to let us brew--apprentice, essentially--alongside them so that we could learn the ropes of a real commercial brewery before we had our own. This was how we brewed all of our beer for the first couple years. Every week, one or two of us (but one was always Pete), would drive the 2 hours to Sand Creek for brewday, usually on a Wednesday. Mash in was at 6:00 so if we hit the road later than 4:00 AM we were late. Back-to-back 20 barrel batches meant we wouldn’t be out for at least 12 hours, and that was if everything went well. Filling some extra firkins, helping with a filter run, or bullshitting with Jim and Todd only extended the day. Not long after we started, we realized we could save money by hauling kegs ourselves in Pete’s carpentry trailer. We couldn’t haul a full batch but it saved us paying for a few LTL pallets every week, though in hindsight the mental toll exacted by some of those midnight returns on wintry roads with an overloaded trailer may not have been worth it.

Despite the quick launch and experience that contract brewing gave us, we were aware of the downsides of contracting immediately. Every time we got to tell our story at a bar or a beer fest, it was the same conversation.

“We’re based out of a Southwest Minneapolis garage.”

“Yes, but we actually do the brewing ourselves, we just don’t have our own brewery.”

“We plan to build our own brewery.”

We quickly got accustomed to being called names like “beer marketing company” or “fake brewers”,  but it always stung. Some people called contact brewing “doing it the easy way” but it didn’t feel like it. To us, it was the only way. If we hadn’t had the option of contracting, we might have never started, or not until years later, anyway. 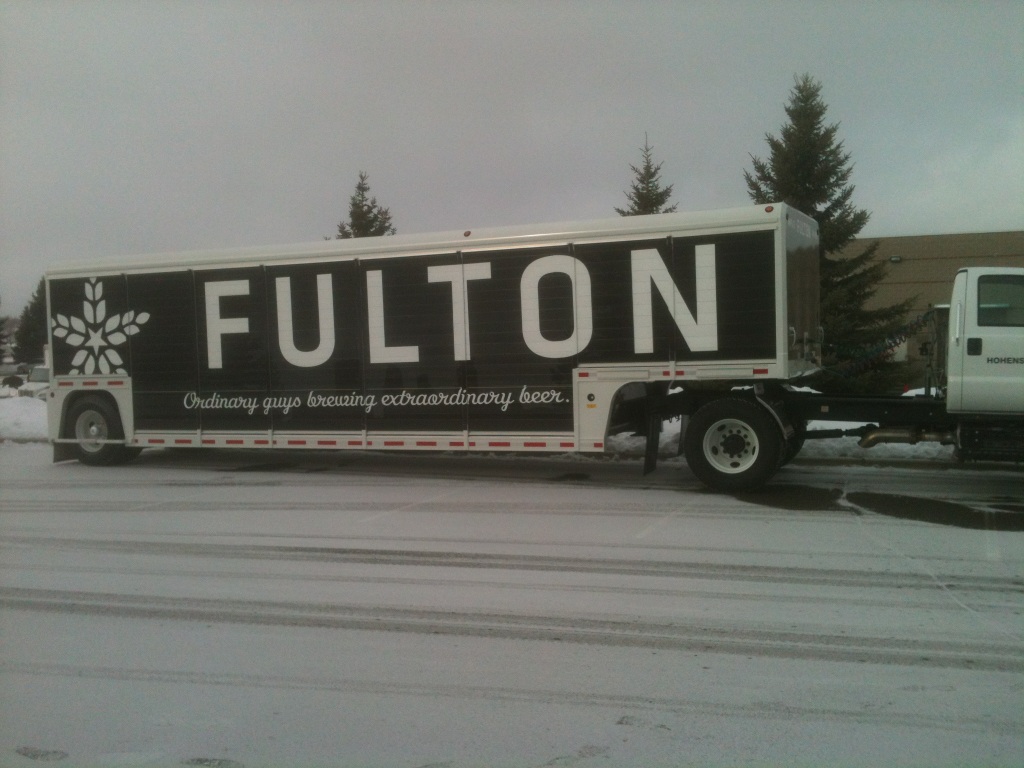 Despite the detractors, we went from an idea about starting a brewery to pouring our first pints of Sweet Child to the public in less than nine months. The first keg of Sweet Child of Vine was tapped at our launch party at the Happy Gnome, on October 28, 2009. The four of us came to the Gnome from our day jobs, not having any idea of what to expect, hoping at least a bunch of our family would show up. They did, along with friends, classmates, coworkers, curious beer buyers and beer geeks from across the metro who’d seen our launch announcement online. The Sweet Child pours were beautiful: great lacing on the glass, perfect clarity, Simcoe and Glacier aroma leaping from the glass. The first keg was gone quickly, and before the night was over, nine more were tapped. The Gnome had poured over a thousand pints of Sweet Child. Everyone seemed to love it -- even those who weren’t family! -- and we even made the 10:00 news. Just like that, we were in the brewing business -- asterisk or not.

*who doesn’t have an actual brewery of our own yet and we brew everything in Wisconsin, but it’s just for now and if you have a minute we’ll tell you about the big picture plan.

**Soon thereafter, the Focus was re-christened “The Fulton Focus” so it felt like we had a company car too.

A Beer For Talking About The Weather 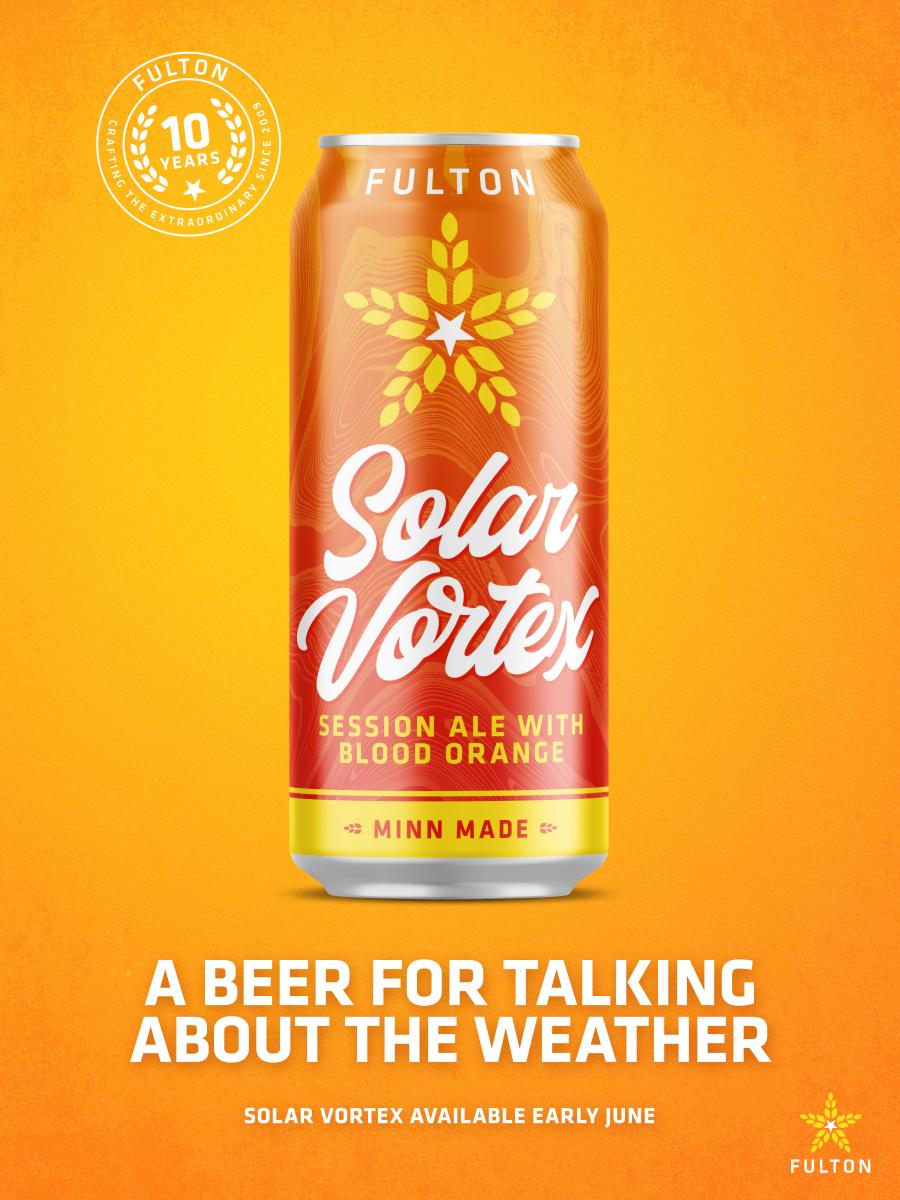 It's raining. It's snowing. It's too hot. It's too cold. In the land of partly-cloudy we sure do enjoy our talk about the weather. And in that spirit we've crafted our newest beer: a Blood Orange Session Ale we're calling "Solar Vortex". Inspired by a yet-to-happen summer weather phenonenom (call it wishful thinking), it's dry, low in alcohol, and perfect for the summer ahead. Pick your 4packs of tallboys up beginning next week around the Metro.

Have more fun with Fulton Hard Seltzer
Posted Tuesday May 21, 2019 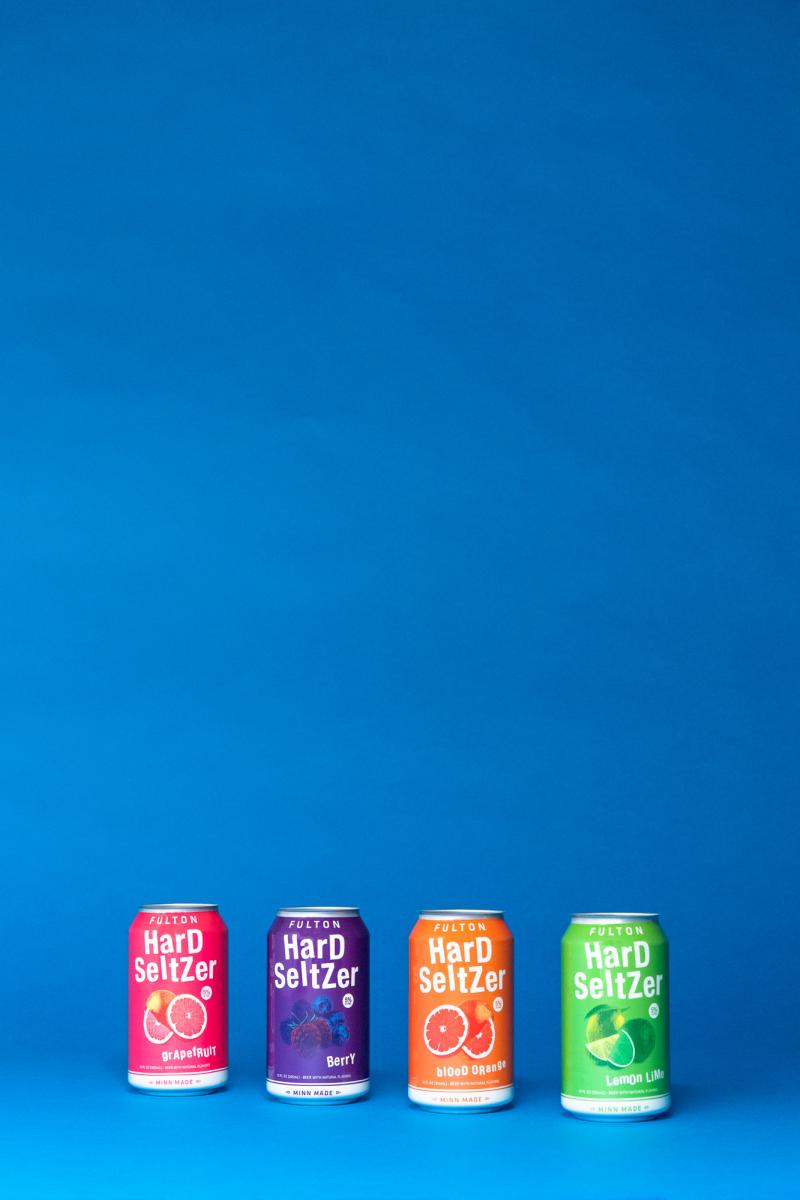 As if brewing approachable, extraordinary beers 5 days a week wasn't enough already we're throwing our collective hats into the ring of the Hard Seltzer. And, if our experiences at Twin Cities Burger Battle and Grumpy's Art-A-Whirl party this past weeked are any indication of enthusiasm for this stuff, things are going to be quite fruity and fun this summer. Comprised of flavors including: Grapefruit, Berry, Blood Orange, and Lemon Lime there's sure to be a little something for everyone in this package. We spent nearly a year working on recipes, flavor combinations, new processes, packaging and identity work across all departments. We now can proudly say the fruits (pun definitely intended) of our labor are yours to enjoy.

We're happy to announce that Fulton's first shipment of Hard Seltzer Mixed 12packs has left the building! These party starters should be arriving in a liquor store near you within days for those living in the MSP metro (and spreading out from there). We hope you're ready to have more fun this summer. We certainly are. 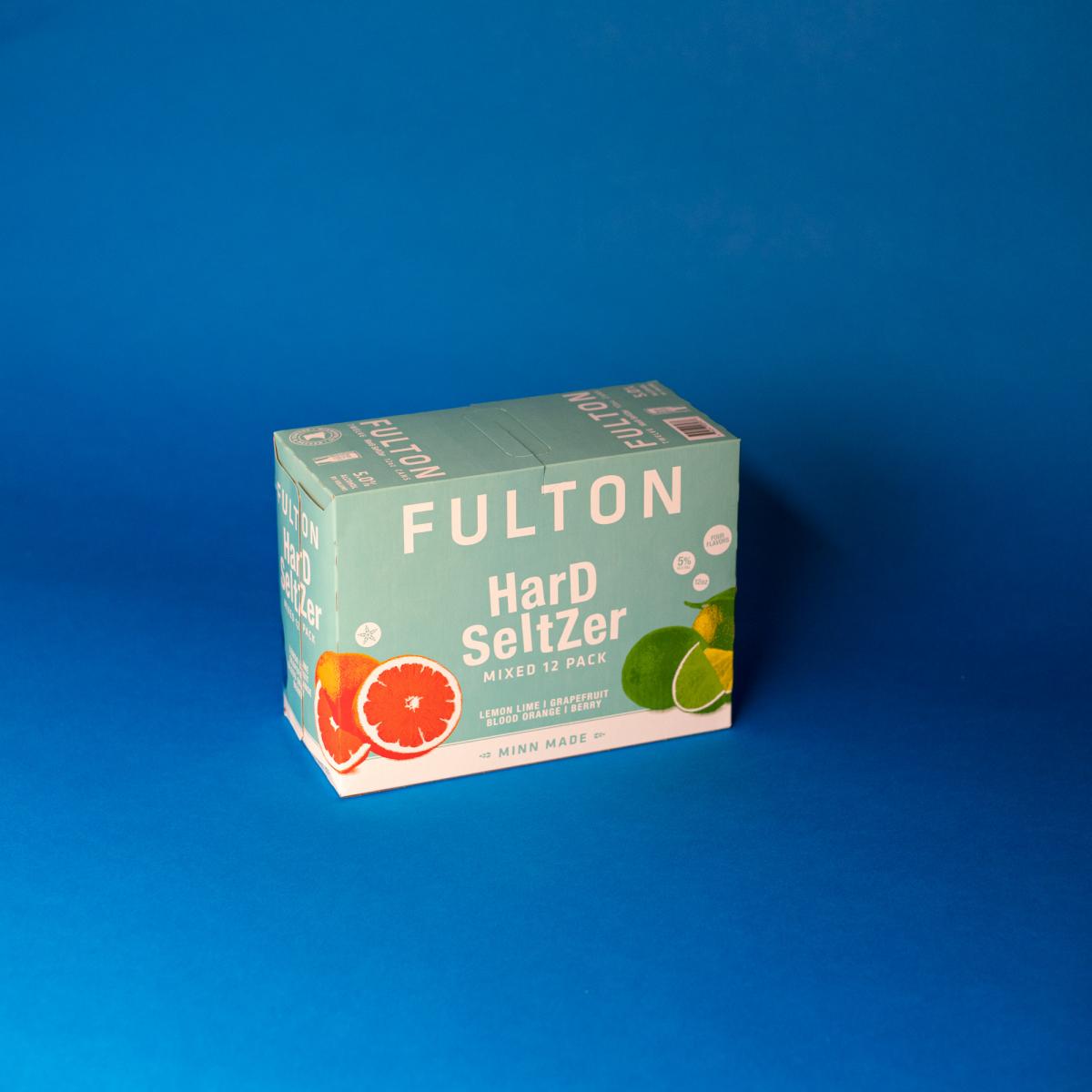 We're crackin' cans for all four flavors beginning Thursday May 23rd in the Fulton Taproom. Make em' yours!